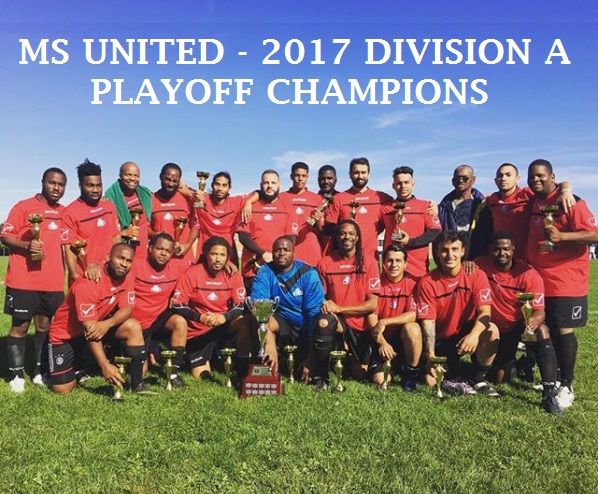 The 2017 outdoor season for St. Michael’s Soccer Club marked our 17th year of offering outdoor soccer in the McCowan and Steeles area.  The season consisted of 19 teams broken down into 2 divisions of play.

Our division A consisted of 12 teams. We had a combination of many returning squads such as M.S. United, FC Eagles and Bafana, and some new teams to add to the competition such as ENA FC, Net 6 and Chill and Immortals FC.

Our Division B consisted of 7 teams which was comprised of the returning champions North York FC, and many staples to the league such Toronto Phoenix, Unionville Stars and T-76ers.

In the A division, Net 6 and Chill, Immortals FC, Bafana and ENA FC had great starts to the season. Net 6 won their first four matches of the season and were leading the division with 12 points while Immortals FC and the other two teams were trailing them by 2 points and 5 points, respectively.

The B division, was even closer in terms of the gap between the top teams within the first half of the season. A new team to the league named FC CPU had an impressive start as they had a clean score sheet, won their first 4 games and were tied in first place with T-76ers.

The mid point of the season was also highlighted by the 15th annual Archangel Cup Tournament, which matched up the teams of St. Michael’s Soccer Club against the teams of Maple Leaf Soccer Club.  The first round of the Division A match ups were dominated by the teams in St. Michael’s S.C. as 4 of the 6 squads to advance were from our league. However, the Division B teams in St. Michael’s S.C. did not fare as well as only the T-76ers were able to advance.  The last two rounds of the tournament were played in September/2017. 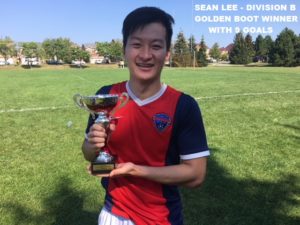 Towards the end of the regular season, certain individual players were starting to stand out for their abilities of both scoring and saving goals. In our A division,  both Stephen Piliotis of Net 6 and Chill and Mohamed Shoblaq of FC Alliance were leading the  Golden boot race while in Division B, the race was a bit closer. Sean Lee of FC CPU, Matthew Cooke of Unionville Stars and Paul Morra of T-76ers were all a goal apart from leading the division in the Golden Boot race.  In the end both Stephen Piliotis and Sean Lee ended up edging out the competition and won the Golden Boot Award in their divisions by scoring 15 and 9 goals, respectively. 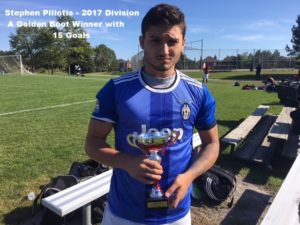 2017 also marked the first time in St. Michael’s 18 year history that  goalies were recognized and awarded for their outstanding efforts in net throughout the season. In Division A, Brana Manokharan of ENA FC  only allowing 5 goals during the entire season in what was a stacked division. Also Peter Trentini of the T-76ers (Division B) only allowed in 15 goals during the regular season. Not surprisingly, both of their teams were at the top of their standings in their respective divisions.

The regular season champions in Division A were literally crowned in the last week of play as the division was so tight. There were 3 teams (Net 6 and Chill, ENA FC and Paris St. Jabroni) that only had a 3-point gap from each other leading into the final week of the regular season. There was no room for error in that final week as a mistake by any of those 3 teams could have cost them the Division Championship. However, in the end, Net 6 and Chill edged out ENA FC by 1 point to win the division.

The Division B regular season championship was won by Markham United who had a very strong second half of the season. In the end they had a 7-point gap between the 2nd place T-76ers. 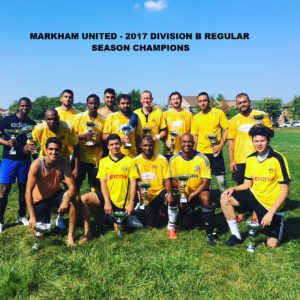 The playoffs grids for both divisions were now set for the 2nd week of September/2017. In Division A, there were a number of upsets in the Quarterfinals as the all of the lower seeded teams ended up advancing in the first round of the playoffs. In Division B, no upsets occurred as the higher seeded North York FC and FC CPU both won their matches. In the semifinals, North York FC was victorious over the regular Season Champs, Markham U, by a score of 1-0 and T-76ers were in fine form and edged out FC CPU by a score of 1-0.

In the Division A Semis, a rematch of the 2016 championship finals occurred as MS United took on FC Eagles. However, MS United was able to come out victorious this time by a score of 2-0 and advanced to the finals. The other semifinal match up was also a nail biter as United FC was matched against Immortals FC. However, as luck would have it, the goal posts appeared to be United FC’s nemesis that match as they hit at least of them in the match and were edged out by Immortals FC by a score of 2-1.

Championship Sunday took place on October 1, 2017. In the Division B finals, NorthYork FC was matched up against T-76ers.  Despite being down a goal in the second half, North York FC rallied back to win the match by a score of 4-1. This marked their 2nd consecutive championship victory in the B division. 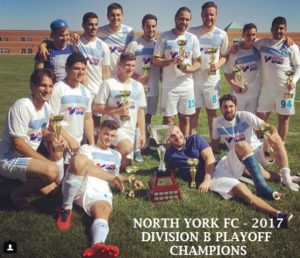 In Division A, the match was very close up until the 80th minute of the game in which it all changed. Alwyn sent a beautiful through ball to Peter Mastrangelo who ended up burying the opportunity in the back of the net. This was the second time in 4 years that Peter Mastrangelo had scored the winning goal for his team in a championship final match. It was a great team effort by all players and this victory marked the teams 3rd championship since 2013.

The last match of the day was the Division “A” Archangel Cup Tournament Finals between United FC and Net 6 and Chill. The game was very close in regulation time as the score was only 1-1. However, in the extra time of Golden Goal play, United FC was able to score to win in dramatic fashion and clinch their 2nd Div A Archangel Cup Championship since 2010. 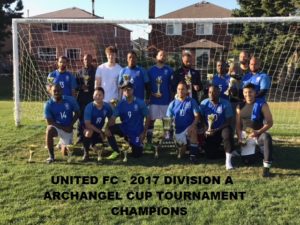 At the time this blog was posted, registration for the 2018 outdoor season is open. We know it will be an exciting season and we look forward to hosting new and returning teams.